It has been three years since the annual Unionville High School Art Gala was held in person. But he returned this weekend, and Artist Liaison Diane Micklin is happy he’s back. Due to the COVID response, this is the first in-person gala since 2019.

“It’s great to have new faces, traditional art but with a new look. I’m glad we’re back in person,” Micklin said.

Among the new faces at last weekend’s gala were Francine Dunigan, Susan Moore and Andrea Barrie. 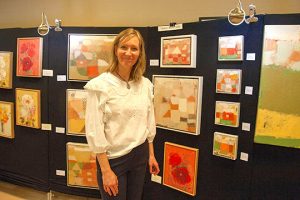 According to star artist Temre Stanchfield, color is sacred in his work.

Dunigan describes his work as a single-print collage. She prints colors on individual pieces of paper, sometimes found paper or even tissue paper, and then layers them. She was a commercial design student in college, but said she started the new technique after following other artists on Instagram.

Moore, a retired nurse, now makes pottery and said she got involved with the UHS Art Gala because a friend has a daughter at UHS who told her about the event. Barrie, who makes jewelry, also got involved on the advice of a friend.

But there were also returning artists, like Carol Mangano and Temre Stanchfield.

Mangano, who also exhibited at the former Barbara Moore Fine Art Gallery in Chadds Ford, returned to the UHS event for the fourth time. She said her work is impressionistic “but it changes all the time with a touch of realism when I feel like it”.

About the gala itself, she said she loved doing the event because she was a former art teacher, adding that seeing the gathering of artists exhibiting their works was like a prom night.

Stanchfield was also back for the fourth time, but this year she was the featured performer. She also likes the gala.

“It’s such a lovely event. I love the community,” she said.

Her work, Stanchfield said, is how she puts her view of the landscape, using color in an abstract form.

“Color is sacred to me. I find it compelling. It represents unbridled possibilities and that is what opens up my work. I like to think of it as a process of discovery.

In addition to that of the professional artists, the art of the students was exhibited. Of their work, Sarah Snyder-Dinsel, a member of the Student Art Show Committee, said in a press release, “I am constantly amazed by the high caliber of artwork created by UHS students. It is such a pleasure to see their pieces, and our selection of a senior artist is never easy.

Proceeds from the show benefit the UHS PTO.

Rich Schwartzman has reported on events in the greater Chadds Ford area since September 2001, when he became founding editor of the Chadds Ford Post. In April 2009, he became editor of ChaddsFordLive. He is also an award-winning photographer.

Interior designer Giampiero Tagliaferri’s Los Angeles home is an object lesson in the wonders of 20th-century Italian furniture and the affinities between Italian Modernism and the Mid-Century Modern movement incubated in Southern California . Shock block with treasures both familiar and obscure, the decor includes works by luminaries of the order of Gae Aulenti, Vico […]

What to expect at The Truck Stop, Wichita’s new food truck park

The newest food truck park has finally opened in Wichita. The truck stop is the largest park of its type in the city. Property of Willie Finley of Willie’s Wingsthe park is located at 6315 E. Kellogg Dr., on the southwest corner of Kellogg and Woodlawn. The best way to get to the Truck Stop […]

Skye Gallery has brought back interdisciplinary artist Spencer Hansen for his fourth consecutive winter solo exhibition. Open tonight and on view until April 15, this year’s exhibition with the Bali-based artist may be the last exhibition held at the Skye Gallery space on the corner of East Cooper Avenue and South Hunter Street in the […]