Superman is not the only “Man of Steel”. This nickname could apply to Steven Maeck of Decorah, Iowa, a sculptor who works in welded and assembled steel.

Donald Horstman’s “Just Visiting” has been moved from Ascentra to Bettendorf to the Geneseo Public Library.

The 64-year-old Vermont native is among 10 Midwestern artists chosen this year to have their sculptures rented and placed in the Quad-Cities last month, as part of the Quad City Arts Public Sculpture Program. The pieces will be on display until June 5, 2022.

Maeck’s work, “Muso’s Thought,” can be found near the Channel Cat Pier on the Mississippi River in downtown Moline, near the Radisson Hotel. Since 2002, he designs and manufactures sculptural works entirely or partially composed of iron and steel.

“The focus of my recent work has been almost exclusively in using industrial trash which I modify and / or recombine in such a way as to create work that is not only resonant and original, but manifests the aura of having been created. from the basic raw material, ”he said, noting that he asked 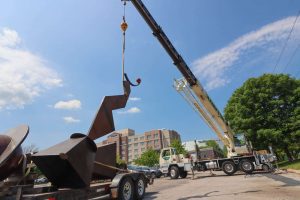 Steven Maeck’s “Muso’s Thought” installed by Hampton Cranes on the promenade in downtown Moline near the Radisson on John Deere Commons.

Moline before becoming part of the public art effort, but this is his first accepted piece.

“Public art is one of the real behaviors or actions of a civilized society,” says Maeck. “The growing importance and popularity of public art nationwide is a very good sign in the face of all the horrible things that have happened recently.

“From my brief experience with this program, I can say that Quad City Arts is made up of dedicated, knowledgeable, professional and friendly people,” he says. “That fact, and the fabulous site that ‘Muso’s Thought’ currently occupies by the river, is the best thing I enjoy about this program.”

The offbeat title represents “everything that happens in the consciousness of the person who meets the work”, notes the artist. It’s just the 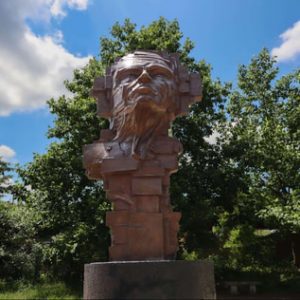 David Zahn’s “Matrix” can be found at Moline’s Bass Street Landing, next to 17th Street and River Drive.

second year, the town of Moline has participated in the long-standing program, and each town has its own selection committee that chooses art.

Moline added two more sculptures this year, for four in total; Bettendorf added seven, and the Geneseo Public Library rented a sculpture for the first time. Rock Island has chosen to re-let four of the group’s sculptures from last year and to purchase Tim Frye’s “Reaching to the Moon” sculpture for its permanent collection.

The other sculptures by Moline placed in June are:

Geoff Manis, director of the Moline Center Main Street program, said his group (working with Renew Moline) had nearly 60 sculptures to choose from, brought to life by Quad City Arts.

“We had two more than last year; Bass Street has a carpet sculpture that has never been used, ”he says. “And Mercado is such a wonderful community event. My role at the Moline Center is to do anything to help complement what they do – to their vibrancy. They have one 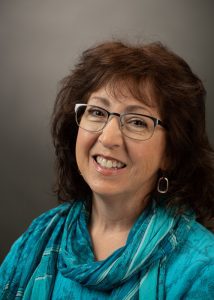 very high traffic, and this is really a gateway to Moline, heading west towards Moline town center.

Quad City Arts has been leading the rental and installation of public sculptures in the Quad-Cities since 2002. The city of Rock Island has participated in the program every year since 2007 and Bettendorf since 2008.

Six sculptures are now part of Rock Island’s permanent collection, while Bettendorf has added seven. Davenport purchased nine sculptures while participating in the program. Sculptures are chosen by nominated committees and rented for one year. All sculptures are for sale and can be purchased by individuals, businesses or a city for permanent installation after June of the following year.

“Each city has its own selection committee and that’s because it knows its city, it knows the places,” says Dawn Wohlford-Metallo, director of visual arts at Quad City Arts. “Some spots need something big and bright and some need something smaller, and they think about each location as to what will look best and be best for that location.”

One of Bettendorf’s ancient sculptures (from Ascentra Credit Union, 2019 Grant St.) – “Just Visiting” by Don Horstman, Easton, Missouri – was selected by the Geneseo Library this year. 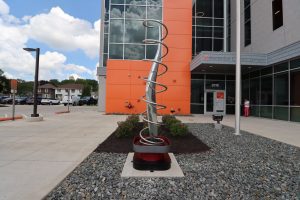 Peter Gray’s “Flame of Remembrance” was installed at Ascentra Credit Union in downtown Bettendorf in memory of their late CEO, Dale Owen, who died of cancer last fall.

“It was a bit unexpected. They just saw the program and they were like, well, we want one, ”Wohlford-Metallo said. “They didn’t even know they could choose from all of these new sculptures. So they just thought, well, these go – we want this one. We are still trying to expand into other cities.

“There are programs similar to ours all over the Midwest and what artists do is enter their sculptures available in multiple competitions,” says Wohlford-Metallo. “And then those who are about to be released from where they were last year are available to move elsewhere.

“So some of those who were in our program in 2020 are going to go elsewhere, and some of them will go home with the artist,” she says. “Sometimes they repaint or refresh them, and then they wait to be picked by another program or bought. Many public sculptors have mini sculpture parks on their property.

Bettendorf was quite aggressive in purchasing parts. “The purchase is part of the goal, I think, so that they can have permanent sculptures,” says Wohlford-Metallo. New this year in Bettendorf are:

Jennifer Naeve, Senior Vice President and Chief Marketing Officer of Ascentra, said when opening their new headquarters in 2019, then CEO 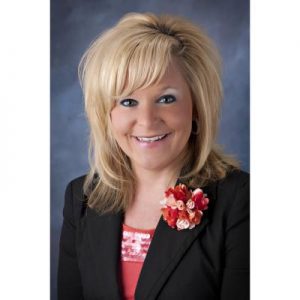 Jennifer Naeve is the Senior Vice President and Chief Marketing Officer of Ascentra.

Dale Owen wanted the square to feature a piece of public art, as Bettendorf already had several of these sculptures scattered around the city center and community.

Last November, Ascentra lost its beloved CEO, at age 52, to pancreatic cancer. The credit union sought to replace his sculpture and found some divine intervention.

“Looking through the sculptures, one of them stood out,” Naeve says of “Flame of Remembrance”. The artist’s statement on the coin’s design said, “Traditionally, we have annual keepsakes for those who are long gone. However, in 2020 we have been immersed in a reality where we have to remember a lot of their sacrifices NOW, not later. So please think of them as you watch this Flame of Remembrance. “

“Ascentra chose this sculpture for our place because it seemed appropriate,” said Naeve. “Not only have we lost our dear friend and mentor, but it has been a year of loss for many as our nation endured 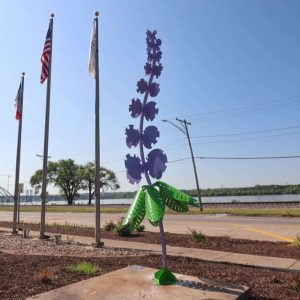 Tim Adams’ “Lupine” is found at Martha’s Point west of Bettendorf, along the Mississippi River.

a pandemic and social awareness. The sculpture is there for every employee, member and member of the community to see and reflect on those who have made a difference in their lives and those they have lost. May their flames burn forever in each of us.

She encourages other organizations to participate in the public sculpture program “because it brings art and vitality to the community.” The Quad City Arts makes it so easy to be a part of this program, ”adds Naeve.

Wohlford-Metallo says the most exciting part of the process is “watching a Hampton Crane operator use his arrow to lift a sculpture from an artist’s vehicle, hoist it high into the air, and gently lower it onto a slab of stone. concrete, like the artist who created it.

The artist will then drill holes in the concrete and fix the sculpture. Hampton Cranes, based in Bettendorf, generously donates its services each year to Quad City Arts.

As the Covid pandemic has inspired many to seek stress relief and relaxation outdoors, public art in the area may have been appreciated differently and more widely over the past 16 months. “We have had people who contacted us and told us this and asked us about the maps that we put on our website,” Wohlford-Metallo said. “So yeah, we got a lot of comments from the public that they wanted to come out and go see them.”

All of the sculptures currently on display, as well as the permanent sculptures, can be viewed at www.quadcityarts.com/public-sculpture.html, along with the websites of the sponsoring cities, and a map of their exact locations.

Jonathan Turner has covered the Quad-Cities art scene for 25 years, first as a reporter for the Dispatch and Rock Island Argus, then as a reporter for the Quad City Times. Jonathan is also an accomplished actor and musician who has often been seen on local theater stages, most notably at Bucktown Revue and the Black Box Theater.

Thinking outside the Man Box