Traumatic events can aggravate a person and push them into a hole they may never get out of. But if a traumatic experience causes a person to delve into the essence of who they are and explore their own value as a human being, the end result can be both self-knowledge and inner strength, not to mention hard-won wisdom. of endless self-harm and shame. Or, as Nietzsche put it, what doesn’t kill you makes you stronger.

Which brings us to a young artist named Christina Smith who faced her demons and is now more centered for doing so. His personal story underpins an exhibit titled “Integrated” (better understood as “Integrated”) which opens Saturday at ShockBoxx in Hermosa Beach. Smith is quite uncomfortable sharing it, but the need to do so outweighs that. As I tell him during our conversation, he is a courageous person. Most people buried and then hesitated to reveal their hurtful and intimate stories, but fortunately in these times women (and yes, men too) speak freely and candidly in the hope that others with similar stories of misfortune will realize that they are not alone and that what they have been through is not something to be ashamed of.

Christina Smith was born and raised in Clarksville, Tennessee. She comes from a large family, says her parents were great, but then adds that her father was a special forces pilot who saw combat overseas, Mogadishu being an example. “So from a very young age we would go to many memorial services. The men who had been there that weekend had died the following month. My mother was not about to hide the truth from us, that your father is at war; and there are aspects of that in the show.

And so, at a very young age, Smith said, “I associated my father with death and also what did it mean that he killed other people for a living in order to protect us?” A precocious child, apparently, at the age of four, she thought, “But why aren’t these people safe?” This was perhaps one of Smith’s first attempts to reconcile the disparities of our world. “Children are just sponges,” she says, and when I call her a sensitive sponge, she laughs. But she was a sensitive sponge. And is.

Eventually, Smith set his sights on California. “I always had this dreamy idea of ​​the West Coast and Los Angeles,” she says, “and I wanted to keep performing. I was a competitive dancer, so I knew I was going to perform in a one way or another. Then the growth of visual arts kind of chose me – I didn’t really choose him.

She came here in 2007, went to New Orleans for a few years, then came back. We met at his studio, located in the arts district of downtown Los Angeles.

Dancing, performing and now painting, but these are all aspects of Smith’s search for artistic expression. However, although each discipline can convey a mood or a feeling, there is perhaps more autonomy in the visual arts because, unlike being in a dance troupe or in the cast of a play of theatre, “nobody edits it – it’s just you and your story”.

It is not to ignore or look down on others. “The dance side [contributes to] understand where things are inside my body. I am very aware of my body,” which in this case seems to imply that trauma can be stored and expressed both physically and mentally. She says, “I love the human story and how it feels.” But let’s look at how Smith applies all of this to his painting. 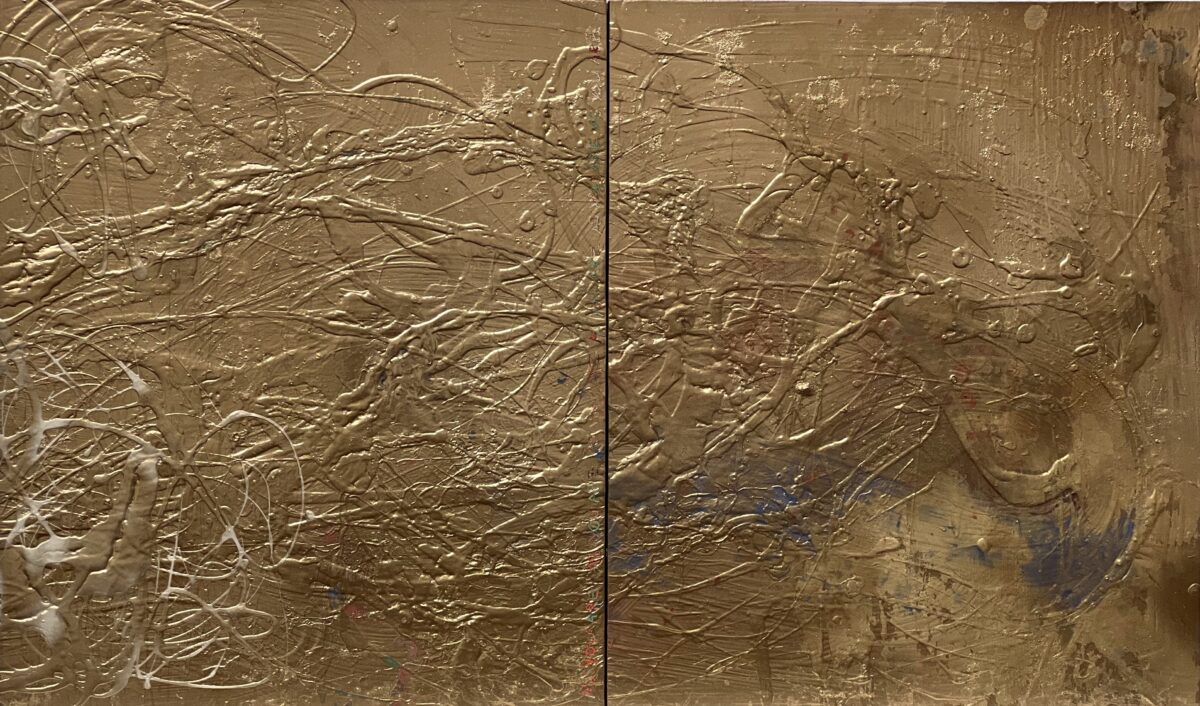 “As You Are”, by Christina Smith

Smith’s canvases are built up, layer by layer. I don’t know how many, but several, and the texture itself reveals this fact. Layering, she explains, is like life itself. After all, we are kind of like onions. You take off one layer and there’s another underneath. Same thing here.

The first layer, however, can be token dirt and trash. It can be graffiti, a hodgepodge of drawings, swear words, whatever. It is the “mud” that constantly drifts through our lives. But, with effort and insight, it can be covered in gold. Gold is that perfect essence of what we can be or at least strive for. And, yes, there may be additional layers of ugly stuff, trying to get the last laugh, as usual, only to be covered in gold yet again. We strive for that 51%, with the good or positive in life finally outweighing, even just barely, the negative and the bad.

All of this layering is active visual metaphor, essentially pouring metaphorical gold into our broken parts. However, we must also become our own mechanics, to keep our lives flowing and running smoothly.

Smith sums up what I think is one of his motivations for the job: “I always felt fundamentally broken and not good enough, and that took me a long time.” But eventually, she found and listened to “that inner voice, that soft, deep, golden voice inside of us that we all have.” 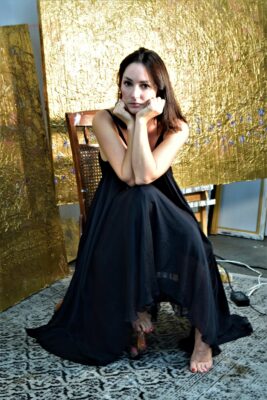 And so, while the lower layers may be intermittently messy, what emerges above is “a deep and untouchably beautiful part of humanity. No one,” Smith points out, “can make it happen, and no one can harm it.” Or, as it applies to art, “No one can tarnish this perfect gold.

“It took me so long to fight for this part of myself. So that’s what I really like about this series. And with the show (at ShockBoxx), I just want to give it context. Smith realizes that everyone has a story of grief, loss, or suffering, and in that sense she is not unduly special and does not ask for anyone’s pity. But the show offers its personal and specific story, with this hopeful message: “If I can get through this, you can get through this.”

One can conclude that what Smith has built is a defensive wall or shell around his own traumas (which includes sexual assault). It may sound a little dismissive, but strength is a self-protective fortification. That doesn’t mean we just hide behind it. After all, this “perfect gold” requires protection against theft or vandalism.

We can look at the gold layered paintings and admire the texture. It’s visually tactile. Many of them too, in my opinion, are like mirrors. Not the kind of mirror above a bathroom sink, but a mirror to reflect your thoughts and moods on you. In some ways maybe all art is a mirror, but non-figurative art can be a better barometer in that sense because there isn’t necessarily the “distraction” of a recognizable form.

But what if the final layer, the surface layer in Smith’s work was not a golden ground but one of the muddy, messy layers? Would this convey the same story, but just kind of reversed?

“I tried that too,” Smith says, “but I never want the pain to win. That’s what my post is right now. It comes down to that 51-49% analogy. Or, again, hope outweighs despair. 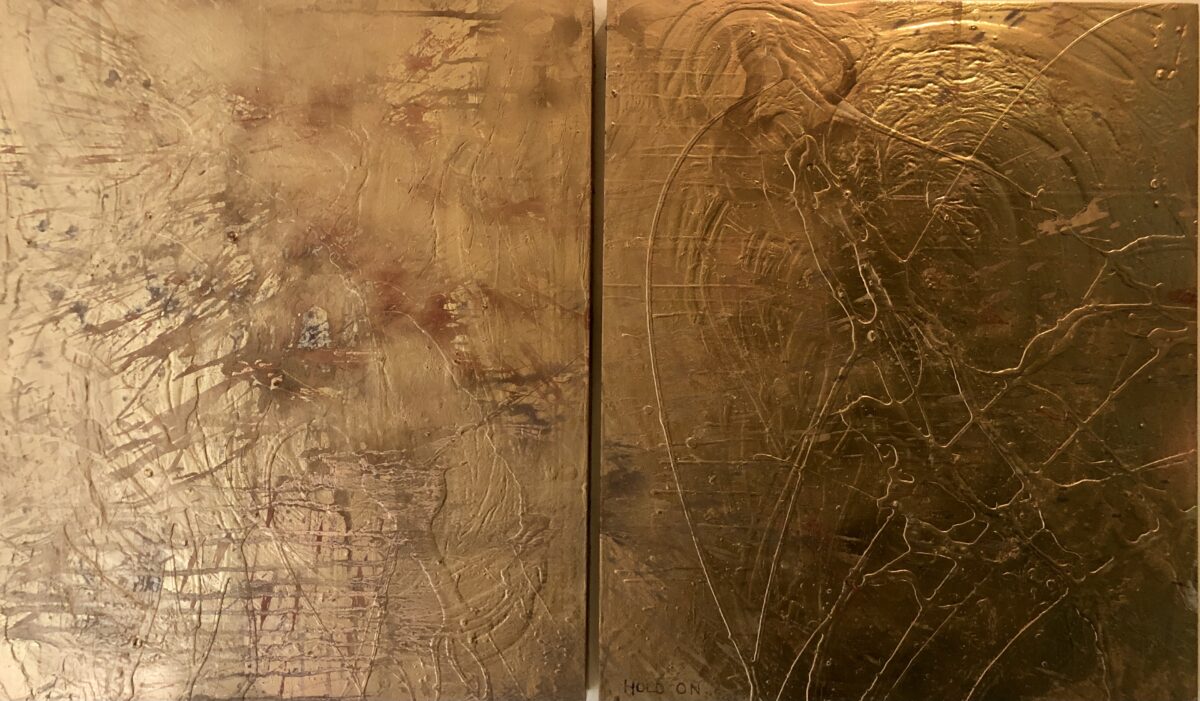 “Hold On”, by Christina Smith

ShockBoxx, which isn’t that big to begin with, has a smaller room at the back of the gallery, and I think most of Smith’s story will be waiting for us there. The multimedia show includes a film that should draw us – like flies on fly paper – to the most intimate space. Smith has been rather cautious about what exactly we’ll see when we peek inside. What we do know is that there is a mixture of bravery and apprehension on his part.

“Whatever my story, I’m still worthy of love and worthy of existing. This is the message I want for all humans, that I can’t live in shame and feel stuck in my life. And yet, there remains “this fear that I will be judged and thrown out. However, she continues, “it’s society telling me that there is shame here. there’s no shame unless I accept it, unless I choose that thought. So, yes, I’m deeply uncomfortable, but I want to do this for this person who has this secret history and who has I feel like I don’t have a voice. Then I feel like it’s worth it.

The accompanying film shows Smith pondering how to get the gold and how to maintain it.

I guess it’s some sort of alter-ego, but Smith the artist is called Amrta, short, one-letter, for Amrita, the latter translating to “immortality” in Sanskrit. Amrita also shares attributes with ambrosia, the so-called nectar of the gods, which is often depicted as honey-gold in color. It is also, says Smith, “the purest thing that would fall from the sky after the war, (meaning that) the war is over. “I took on Amrta because it’s so encompassing” and represents “the idea of ​​who I want to be.” Perhaps in this sense we can also see Amrta as a warrior sidekick to the art, a kind of role model or at least a concept to aspire to. 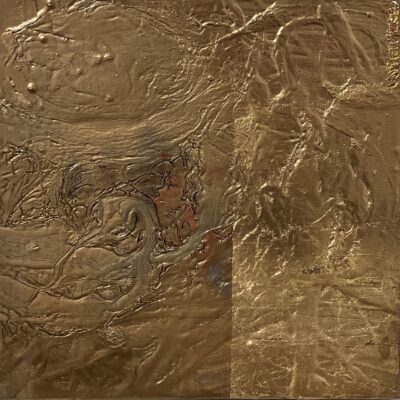 We don’t usually come across references to Amrita, but one of Smith’s hobbies has been the study of religion and comparative mythology. She also found a branch of Buddhism that she could identify with and actively incorporated it into her life as well. It gives her guidance for her life, helps her stay focused and positive, and also “has shaped me to be more of the person I want to be.”

One of our purposes in life is not just to become mature but to become wise; that is, to acquire wisdom. Before discovering the Buddhist teachings that helped her, Smith says she went through a stage where she was angry and reactive. In relationships, she was “always looking for the hurt”, but then had the epiphany that “I don’t want to blow up my life and my relationships, and I don’t want to be angry”.

Wisdom, she says, “is reserved for when you earn it. I haven’t quite acquired the wisdom yet,” but she is acquiring the ability to trust herself and her instincts. And so, by all appearances, Smith is headed in the right direction. But what a trip it has been, no doubt a trip with more discoveries in the years to come.

In the meantime, with her show looming, Smith is entering new and uncertain territory, but believes in herself that all will be well. She takes a risk, of course, in laying bare her inner life, which ultimately is what an artist must always be prepared to do. In his words, referring to the story behind the gold, Smith says, “It’s not about making pretty art objects that people want to hang in their homes, it’s about telling a story – and I think that’s my biggest goal. It’s like, don’t judge it, just let it sink in and out, and it’ll be the story for it.

Posted: Jan 23, 2022 7:00 AM The PTA at Sandy Hook Elementary School recently announced the names of the students with the highest rankings in its Reflections program. Each year, students from schools across the country participate in the Reflections program. The best school entries are submitted at the national level of the competition. There […]

Florida State University’s Office of Research presents the Creative Arts Festival, a collaborative, campus-wide event showcasing the diverse voices, talents, and creativity of FSU faculty and students. Departments across campus will come together October 6-9 to celebrate the innovation and diversity that result from combining diverse mediums and topics. The festival will feature a wide […]