Editor’s Note: MyEverettNews.com strives to introduce our readers to more independent business owners here in Everett, Washington. We want to showcase their businesses, tell their stories, and invite you to shop locally and help move Everett forward. If you know of a company we should feature, email us a suggestion: [email protected] Leland Dart – Editor

Johnny Carswell at a recent artist reception for Going All City NW. 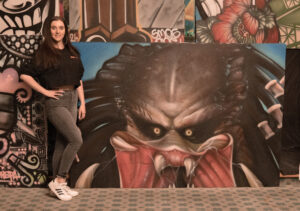 “Baby G” in front of Predator by her best friend “Miles” 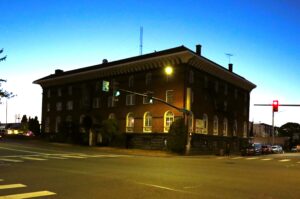 The building is being brought back to its former historic glory to house historic artwork in downtown Everett, Washington. 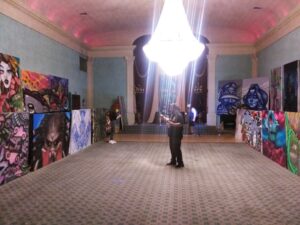 The original light fixtures are still in the historic building. 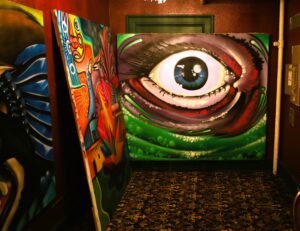 Works of art will be exhibited on all floors of the building. 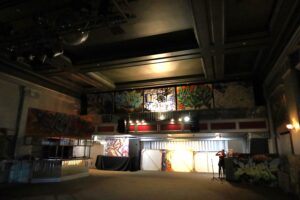 The styles are varied and reflect the history of the art form. 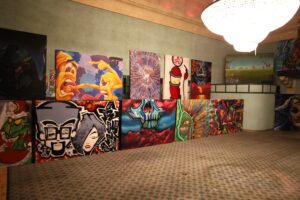 The Carswells have been collecting street art and graffiti for over a decade.

Johnny Carswell, his wife Abigail and their family have been keeping a secret for quite some time.

They have what is considered to be the largest and oldest collection of urban art and graffiti in the United States and probably the world.

“It was a big secret, we didn’t tell anyone,” Abigail told me earlier this month. “It was not planned, it was our family love project.”

For over a decade, Johnny and Abigail have built their collection by contacting artists, sending them blank canvases and asking them to recreate the art they’ve done on the street as well as new original works.

Johnny Carswell grew up in Southern California, Abigail in the Seattle area. She studied art and he gained a respect and appreciation for the west coast style of graffiti that could be found in alleys, bridges, overpasses and buildings away from the general public. They both spent their adult lives in the Snohomish area.

Johnny recently purchased the Masonic Temple/Knights of Columbus building at 1611 Everett Avenue. Known more recently as Club Broadway (which went out of business a decade ago), it recently housed an off-track betting parlor in a small part of the space while the rest was vacant. The building is listed on the National Historic Register.

The building is composed of three floors and a “high basement”. At the time of its construction in 1921, it was known as the Everett Diamond. There was a gym and a swimming pool, a dance floor, a billiard room and a theatre. Originally built by the Knights of Columbus in memory of the patriotism of 41 Knights of Columbus members who served in World War I, the building was sold to the Masonic Order in the late 1920s.

Carswell is a successful business entrepreneur who owned and operated Northland Contractors since 1990. It is a full-service commercial contracting company specializing in high-end tenant improvement projects with a niche market in aerospace technologies. Their clients include Fortune 500 companies and notable Northwest companies.

This latest project is one of passion for the Carswell family. Earlier this month, work began in earnest on renovating the building. “We want to restore it as close to its original state as possible using light fixtures and furniture discovered during our time in the building,” Johnny said. “I love this building and I’m excited to make it shine again.”

The Apex Art and Cultural Center will be an urban art museum and event center. There will be meals and lounges, but also classes and demonstrations with guest artists brought in both to teach and to create. The Carswells have formed a non-profit organization to help them in their efforts.

Upstairs there will be urban art and graffiti galleries with distinct themes – West Coast Graffiti, East Coast Graffiti and Freight Train Graffiti. On the ground floor will be a gallery dedicated to the original power of New York graffiti. Coins in the collection will rotate every ninety days.

The collection is massive and historic, dating back to pieces from the 1960s and the beginning of the graffiti art movement. Curating the exhibits will be a major task, but the Carswells have it well in hand. Gloryanne “Baby G” Carswell grew up in Snohomish surrounded by some of the most important artists in the history of this art form. She got her nickname “Baby G” from the UTI “Under The Influence” Graffiti team of Los Angeles. Every year they come to Carswell’s Farm outside Snohomish and create. They became some of Baby G’s best friends and uncles.

“People want to give graffiti art a negative connotation,” Baby G explained. Take Miles, he was my best friend, so humble and kind. He died last August and he only has 13 paintings left.

The preservation and education of graffiti and street art is the driving force behind Carswell’s efforts. “We are preserving the family legacy of many of these deceased artists,” Johnny said. “I am delighted that this history is preserved in a building that is also historically preserved and I believe that graffiti art and this building go hand in hand.”

Carswell wrote and produced a documentary in 2019 which won multiple awards. “Prophets, Teachers and Kings” is a sixty-five minute film that documents the graffiti art scene in LA and its evolution with artists who have gone from juvenile delinquency to street art influencers and shows the creation of a massive canvas featuring a collaboration of over four dozen artists at the Carswell Farm in Snohomish. Although it has screened at several film festivals, it has yet to be released to the public.

The Apex Art and Cultural Center is expected to attract graffiti enthusiasts and collectors from around the world to Everett, Wash., and is expected to contribute to the City of Everett’s efforts to develop a “creative district” downtown. town. The Carswells hope to open the center before the end of the year.

The top 6 art exhibitions to see in London in July

Tabish Khan the @LondonArtCritic chooses his favorite exhibitions to see in July in London. Each comes with a concise review to help you decide if it’s for you. Those looking for more exhibits should check out his previous top 5 where all but one remain open. Nengi Omuku: Parables of Joy @ Pippy Houldsworth GalleryGhostly […]

Reflections: assessment of an exhibition of self-portraits | Free

Forty self-portraits by artists from the region gather the walls of the Reflections exhibition at the Trox Gallery, until May. The artists involved demonstrated a wide variety of self-image and creative expression. Pops of vibrant color sit alongside dark graphite designs; the faces of experienced professional artists look at the playful self-portraits of local children. […]

Appointment Sandra Dinneen, Paul Farmer, Patrick Newberry, Susie Thornberry and Richard Upton were reappointed Commissioners of historic england for periods of three years and four months from September 1, 2022 to December 31, 2025. Roger Blundell was reappointed administrator of the National Portrait Gallery for a period of 3 years and 7 months starting on […]