Wang Guangyi, Yue Minjun, and Zhang Xiaogang reflect on when Maoist propaganda dominated the visual landscape, as they construct their own visions.

Ai Weiwei regularly makes headlines with record sales and political activism. Far from being an anomaly, its success reflects the steady emergence of contemporary Chinese artists in the global market over the past decades.

Exploring the growing appeal of these artists to the market reveals the particular socio-political climate in which they came of age and how it shaped their identities. The works of Beijing artists Wang Guangyi, Yue Minjun and Zhang Xiaogang embody a synthesis between Western modernity and the replicas of the regime of Mao Tse Tung which restricted free artistic expression.

Mao’s Cultural Revolution Initiative, launched in 1966, was aimed at preserving Chinese communism and establishing extremist Maoism as the main ideology of China. The movement banned art deemed anti-communist or anti-Mao as well as traditional techniques such as ink painting. Artists who resisted were victims of harassment and sometimes even torture. Propagandist art dominated, mainly oil paintings released as posters, used to glorify the regime and provide the public with the visual nourishment of a flourishing socialist state. 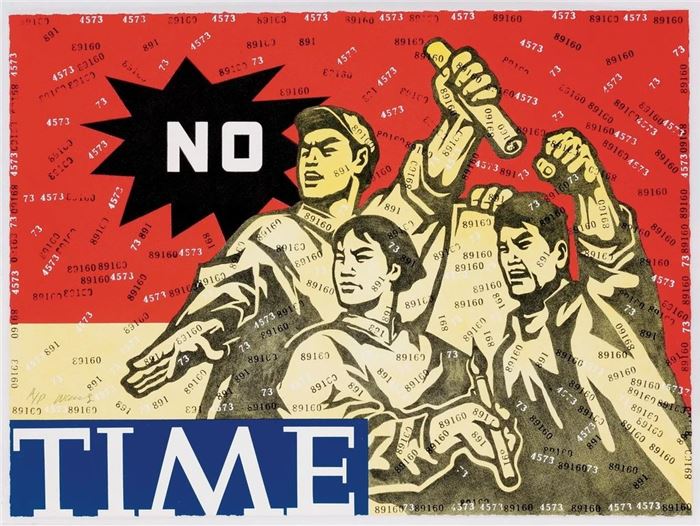 Bathed in communist red, also a remarkable color in Chinese tradition, the posters were often filled with spirited young people reveling in the magnificence of their great ruler. The prevalence of their imagery persisted beyond Mao’s rule, even as artists regained freedom of expression under Deng Xiaoping, whose coming to power in 1978 led the country towards industrialization and globalization. .

Wang Guangyi’s style is directly inspired by Maoist propaganda. Born in 1957 in Harbin, Heilongjiang Province, he witnessed the political and cultural upheavals of the 1960s and 1970s, working as a railway worker in a nearby village before attending the Zhejiang Academy of Fine Arts.

Wang dispels the visceral brainwashing power of the Cultural Revolution in his Big review series. He mixes heroic Maoist imagery with well-known consumerist icons and Warhol-style treatment, a style often described as political Pop. Wang’s juxtaposition between socialist symbolism and Western advertising highlights the subliminal power of the two ideologies, describing a narrative of how one replaced the other in China. 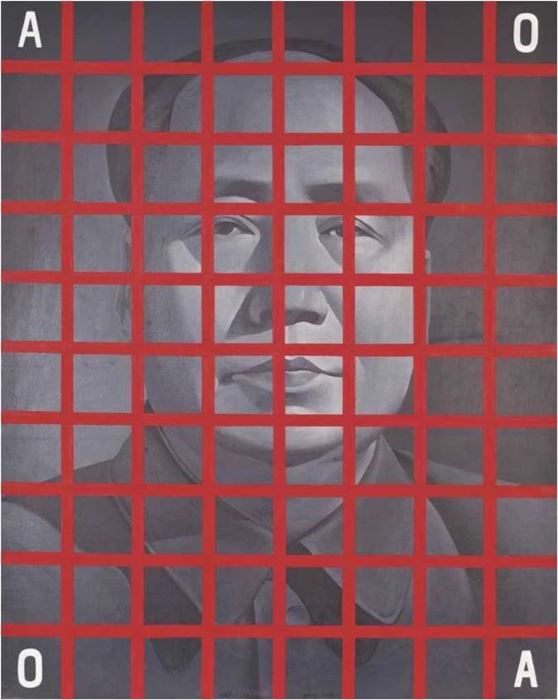 Wang based his Mao Zedong: No.2 of Red Box on the standard portrait of Mao, once a ubiquitous feature in the life of every Chinese citizen, which served to elevate Mao to iconic status. Wang’s bold red lines are reminiscent of the grid system used by Renaissance masters to accurately render model proportions, simultaneously distancing artists from potentially alluring, often nude models. By applying the grid to Mao, Wang also dissociates himself from Mao’s personality cult. At the same time, he divides the revered figure into smaller pieces, each insignificant in itself.

Yue Minjun was born in 1962 in Daqing, Heilongjiang, where his family worked in the nearby oil fields. He is at the origin of one of the most recognizable images of contemporary Chinese art: “this laughing face”. It’s a manic, gleefully unconscious jubilation, caught in a moment of laughter but eternally, perhaps obediently, frozen in time. His closed eyes are blind to reality, their mouths agape in helpless abandon. Yue’s laughing face, based on her own self-portrait, functions as an enigmatic symbol and a common thread in her work. 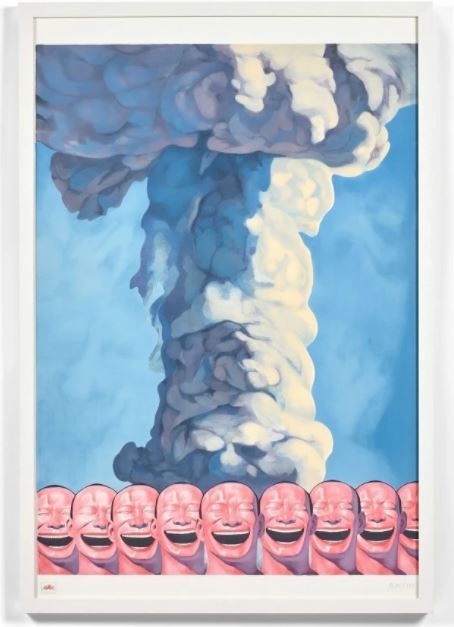 Yue’s Mushroom cloud features a row of identical laughing faces, a unified chewing gum pink-colored mass oblivious to the threatening, swelling mushroom cloud that forms above. The shape of the cloud closely resembles China’s first atomic bomb test explosion in 1964, which ushered in the country as a world nuclear power. By invoking the nuclear test, Yue underlines the blindness of his laughing subjects vis-a-vis the political climate which “explodes” within them. On the other hand, Yue’s subjects implore, maybe ignorance is bliss?

Critics often associate Yue with the Cynical Realism movement, a genre characterized by a humorous and ironic approach to China’s radical transition to industrialization and modernization. Yue’s style is indeed on a fine line between cynical and light, between morbid and playful. 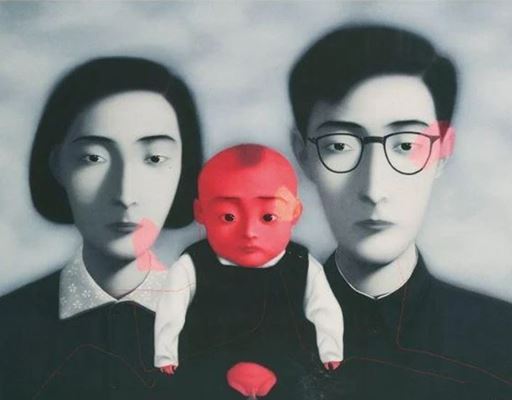 Auction star Zhang Xiaogang was born in 1958 in Kunming, Yunnan province. At one point, her parents were taken away by the Maoist authorities to be “re-educated” for three years. Zhang has been widely praised for his triptych The Black Trilogy: Fear, Meditation, Sorrow, which in 2011 set the record for the highest price paid for a contemporary Chinese work of art, sold for $ 7 million at auction.

Zhang set a new record in 2014 with the $ 12.1 million sale of Bloodline: Big Family No. 3. The artist’s late discovery of ancient family photographs led him to create the Line series, a surrealist reinvention of the type of family portrait common in China in the 50s and 60s. Zhang masterfully transforms the medium of photography into painting and exposes the forced uniformity of the time. The polite faces and blank stares of the characters gaze at us strangely, calm but unsettling, hiding a mysterious past. 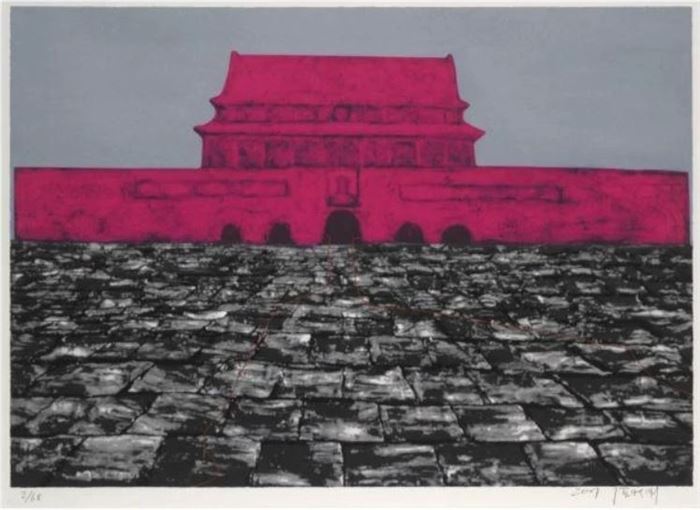 Zhang and his contemporaries grew up in a world where art and politics were closely linked. The ramifications of the time were difficult to tangle, as art schools continued to teach the socialist realist style for several years thereafter. After years of restriction and isolation, starting in the 1990s, contemporary Chinese artists have dramatically emerged on the international scene. The recent boom in the market, initially driven mainly by international collectors, is more recently led by Chinese buyers who order the best lots at auction.

In an open and globalized China, artists reflect on the repercussions of Mao’s Cultural Revolution. While these artists once had strict visual iconography imposed on them, today they reflect on that time to form their own powerful narratives.