Charles and Co. is located at 201 Montgomery Street, Jersey City, NJ, near Grove Street PATH station. Charles and Co. is wheelchair accessible, with elevator access to the roof. As per CDC guidelines, masks and social distancing are requested for those who have not been vaccinated. For other requests and accessibility requests, please contact [email protected].

Tickets cost $ 75 online and $ 90 at the door. Tickets can be purchased online. Art House staff are currently working remotely. If you prefer to purchase tickets over the phone, please email [email protected] and we will arrange a convenient time to call you for the transaction.

“I am very happy to be chairing this year’s Cocktail Under the Stars fundraiser! We missed you last year and we welcome you with an evening of fun, award winners, food, drink and dancing, ”said Michelle Lewis-Bellamy, Board Member. “Art House has maintained its level of excellence in the arts throughout the difficult times of the pandemic through an exhilarating virtual calendar. If you are just new to Art House, this event will give you a great insight into what Art House is. We can’t wait to share this amazing evening with all of you!

“We are thrilled to welcome Art House clients back to in-person events with Cocktails Under the Stars, our annual summer fundraiser that skipped a year into 2020. We honor the people who have helped Art House to succeed by making us laugh, producing virtual programs and championing the importance of nonprofits in Hudson County. Art House has a bright future ahead of it; funds raised through this event will support Art Fair 14C in November and the opening of our new multidisciplinary art space in late 2021 / early 2022, ”said CEO Meredith Burns.

Chris Gethard is a comedian, actor and author. He is the host of the Beautiful / Anonymous podcast, which was recently adapted into a 4-part streaming series on Topic, former host of The Chris Gethard Show, and wrote and starred in the HBO Career Suicide special. He also hosts the New Jersey Is The World podcast, a celebration of his home state. In June 2021, Comedy Dynamics released Chris’s new comedy special, Chris Gethard: Half My Life, which is a hybrid touring documentary and stand-up special shoot in a variety of DIY spaces and indie locations throughout. the country in 2019. Chris has been seen in TV shows such as Space Force, The Office, Broad City, Parks and Recreationn, and Inside Amy Schumer. He has also been seen in films such as The other guys, The Heat, Ghostbusters, Anchorman 2, and was one of the stars of Mike Birbiglia Don’t think twice. Chris can be seen more recently in the HBO Max documentary Collective action park. Chris is also the author of the books Weird NY, a bad idea I’m about to make, and Well lose, and the founder of Scum planet, an online comedy site for the best underground comedians in the country.

Maria L. Nieves is the President and CEO of the Hudson County Chamber of Commerce Serving more than 625 members who do business in the 12 municipalities that make up Hudson County. Prior to joining the Chamber, Ms. Nieves was Director of Public Affairs for Fidelity Investments in New York and New Jersey. Ms. Nieves began her career as an educator at Wadleigh Arts Middle School, an alternative public school located in Harlem, New York. Ms. Nieves received her undergraduate degree in history from Columbia College, Columbia University; a Master of Arts in Education from Teachers College, Columbia University; and an MBA from the Stern School of Business at New York University. She graduated in 2010 from Lead New Jersey and graduated in 2016 from the Institute for Organization Management, the US Chamber of Commerce Foundation’s professional development program for nonprofit professionals. 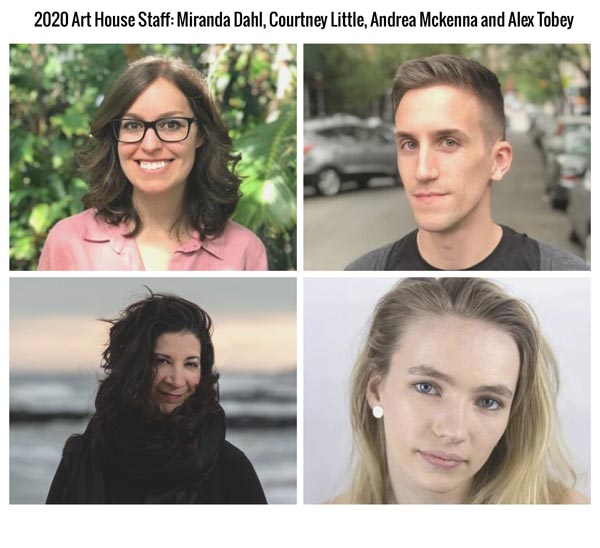 Miranda Dahl, Art House’s Theater Manager, graduated in May 2018 from the Pratt Institute with a BFA in printmaking and a minor in cultural studies. In 2017, she participated in an exchange program in London where she attended Central Saint Martins to study performance design. Dahl trained extensively in contemporary dance, jazz, ballet and hip hop at Dancefx, a non-profit studio in Athens, GA, where she also choreographed for Dancefx Concert Dance Company, FX Performance and Xtensity companies. In the summer of 2009, she studied at the American Dance Festival School in Durham, North Carolina, training with choreographers from companies such as Shen Wei Dance Arts and The Forsythe Company.

Courtney little, Production Manager of Art House, is a New Jersey-based producer, casting director and theater practitioner. Prior to joining Art House in 2019, she worked for Premiere Stages, where she developed and produced new plays, managed education programs and coordinated professional training opportunities for students. Previously, she worked for Richards / Climan, Inc. and Olympus Theatricals, where she appeared in Broadway productions including Fiddler on the roof, Chinese doll, ladies at sea, and Love letters. His independent production credits include the Jersey City Art & Studio Tour virtual tour and Dean Poynor’s Off-Broadway production. Together we make a poem in honor of life. Courtney has worked for New York Stage & Film, McCarter Theater Center, Barrington Stage Company and Mousetrap Theater Projects in London. In 2018, she was honored by the New Jersey Theater Alliance for her excellence in arts education. In 2020, she served on the Jersey City Arts Fund Committee, helping pass a municipal referendum establishing a local tax to support the arts. She holds a BA in Theater Arts from Clark University in Worcester, MA.

Andrea McKenna, director of the Art House gallery, is a visual artist and curator. She graduated from the School of Visual Arts and has exhibited work around New York and New Jersey for 25 years. Originally from Fort Lee, Andrea moved to Jersey City in 1999, bringing her own brand of art and style, and created the biannual ‘Once Upon a Market‘ pop-up boutique event. From March 2014 to September 2017, she co-founded and organized “The Raven Gallery and Boutique” located on Newark Avenue in downtown Jersey City. In 2019, Andrea appeared on the TV show “Flea Market Flip” and won the challenge of that episode. Andrea is the owner of Videre Decorative Arts, a company specializing in painted finishes for walls, ceilings and furniture.

Alex Tobey, director of INKubator of Art House, is a Brooklyn-based director obsessed with music, magic and mystery. He has directed or developed plays at The Tank, The Brick, The Exponential Festival, HERE, Fourth Street Theater, The Wild Project, JACK, The Drama League, Access Theater and NYSAF / Powerhouse Theater. Alex is the resident director of INKubator at Art House Productions and executive producer for Leah Ryan’s Fund for Emerging Women Writers. He grew up in North Carolina, loves Krispy Kreme donuts and Bojangles Cajun filet cookies, and has a BFA in Achievement from Carnegie Mellon University.

Art House Productions is generously supported by the New Jersey State Council on the Arts, SILVERMAN, the Princeton Foundation, the New Jersey Theater Alliance, the Hudson County Office of Cultural Affairs, and the Alliance of Resident Theaters / New York.

Advertise with New Jersey Stage for $ 50 to $ 100 per month, click here for more information